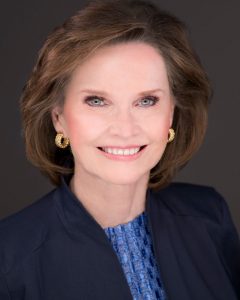 Jane Jayroe Gamble is a third generation Oklahoman and a former Miss America. For 17 years she enjoyed a career as a television news anchor in Oklahoma City and Dallas Fort Worth. She also served as spokesperson for the Oklahoma Health Center and Cabinet Secretary of Tourism for Oklahoma.

Jane has written articles for national magazines and is the author of several inspirational books, including Devote Forty Days, More Grace than Glamour (with Bob Burke), and Oklahoma III (with David Fitzgerald). Her latest book, Practice: Unleashing the Power of Faith, was released December 2018. Jane is the founder and director of a successful luncheon series for Oklahoma women called “Esther Women,” which is in its 15th season.

Jane is a tireless volunteer, serving her church, community, and state in many ways. Currently, she serves on the boards of Oklahoma City University, Salt and Light Leadership Training, MAPS3 Parks Subcommittee, OKC Philharmonic Board, and Mercy Hospital’s Foundation. Five Oklahoma Governors have appointed Jane to a variety of state leadership positions.

Jane is a graduate of Oklahoma City University with a Masters from Tulsa University; she was awarded an honorary Ph.D. from OCU. Jane has received many local and state awards including the state’s highest honor, induction into the Oklahoma Hall of Fame in 2007. She is married to Gerald Gamble and has one married son, two grandchildren and a sassy dog named “Maggie.”

About Practice: Unleashing the Power of Faith

Famous Oklahomans and next-door neighbors . . .does God speak to me through their stories? Throughout history, God has used stories of ordinary and extraordinary people to show His power and purpose. From Abraham and Moses to Mary and the woman at the well, we have learned how faith fuels a life. Today is no different. From the corners of Oklahoma, from the urban centers to the rural spaces, God's story is made clear in the lives of people...our friends, our heroes. For some, their stories are played out on a national stage, for others their lives are known locally. But God's story, as lived out through God's people, is always powerful regardless of the scope of influence. Well-known Oklahoman Jane Jayroe gathered the stories of men and women from throughout our state who were willing to share their faith in order to strengthen our own. It's not about spiritual perfection; it's about authentic insight into personal faith journeys. Does God speak to us personally through the stories of others? Absolutely, for the person who seeks, will surely find, and experience the power of God unleashed in their hearts and lives.